Beautiful 200 m long natural pool in the river, with a 10 m waterfall created by a dam. Located in the Sierra Guara Natural Park, Huesca (Spain).

Salto de Bierge is one of the most popular bathing areas not only in Huesca but also in Aragon. The creation of a hydroelectric power station last century next to the river Alcanadre resulted in a dam and a waterfall. There are two areas. The part below the waterfall has a deep and extensive pool surrounded by large stone slabs. The upper area has a ‘beach’ and calm, shallow waters. Nowadays, it is only possible to access the upper area. It’s a large area with trees where people gather for picnics.

Sierra de Guara mountain range is a world reference in the practice of canyoning. Salto de Bierge is the endpoint of several popular canyoning routes, such as the Barranco del Formiga and the Barranco de La Peonera. Canyoners finished the descent with a 10 m jump from the dam, which was imitated by bathers. A viral ad by Samsung recorded here, resulted in the overcrowding of the place. This led to environmental problems, waste and noise. Organized buses from outside the province travelled there.

To avoid overcrowding, in 2016, it was forbidden to jump from the dam. Today, it’s not even possible to get close to the waterfall, as it’s delimited by a floating cork fence. In 2017, staff were hired to guard and clean the area, a price of €3 was set, and the capacity was limited to 250 people per day. Currently, you could make an online reservation to make sure you can enter the busiest days (see below where to book online).

A fence has also been erected around the place, because of possible landslides on the hillside. Hence, when you enter, you can no longer see the waterfall, and you have to walk across the river to get to the ‘beach’ area. The water reaches your waist, and you’ll have to carry everything on you (cool box, mobile phone, bag, keys, etc.). It is not slippery, but it is advisable to wear booties because of the stones in the river bed. 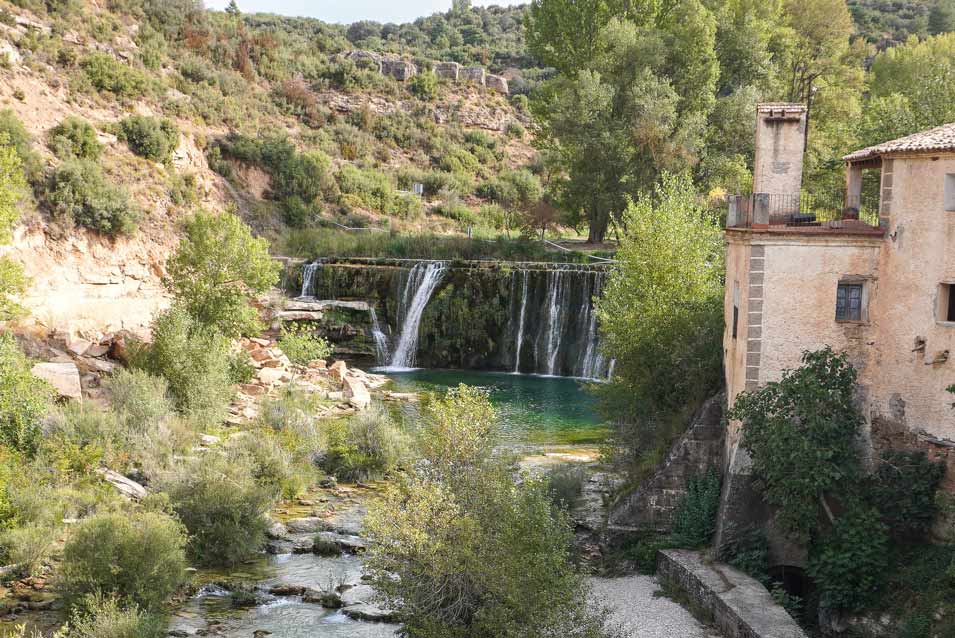 The 10-metre waterfall was created by the dam on the river Alcanadre in the Sierra de Guara. This is the view of the cascade  from the A-1227 road, which leads to Salto de Bierge. 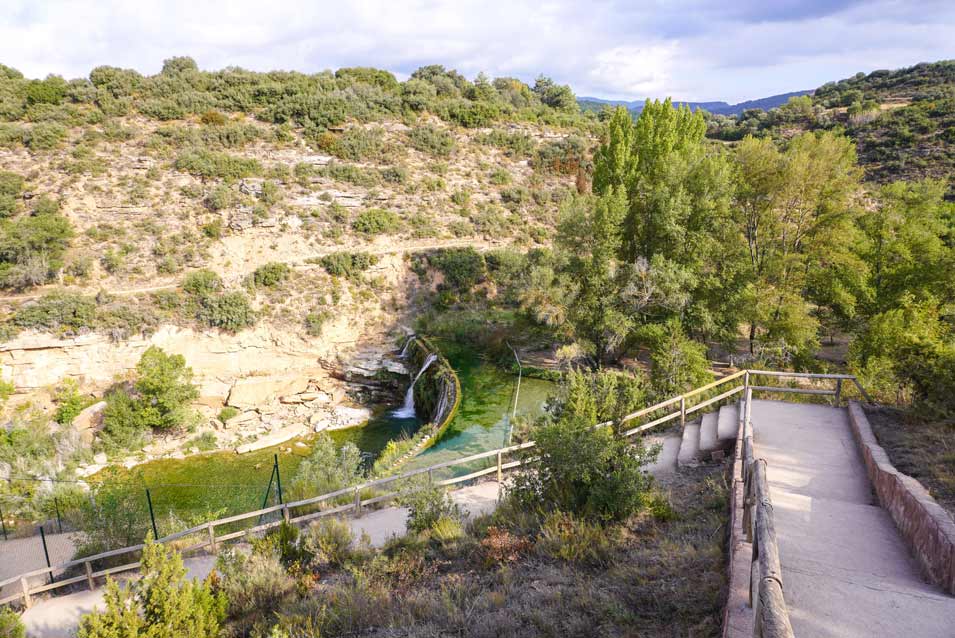 From the large car park, take this path down to Salto de Bierge. This weir is responsible for controlling the water level of the river Alcanadre. 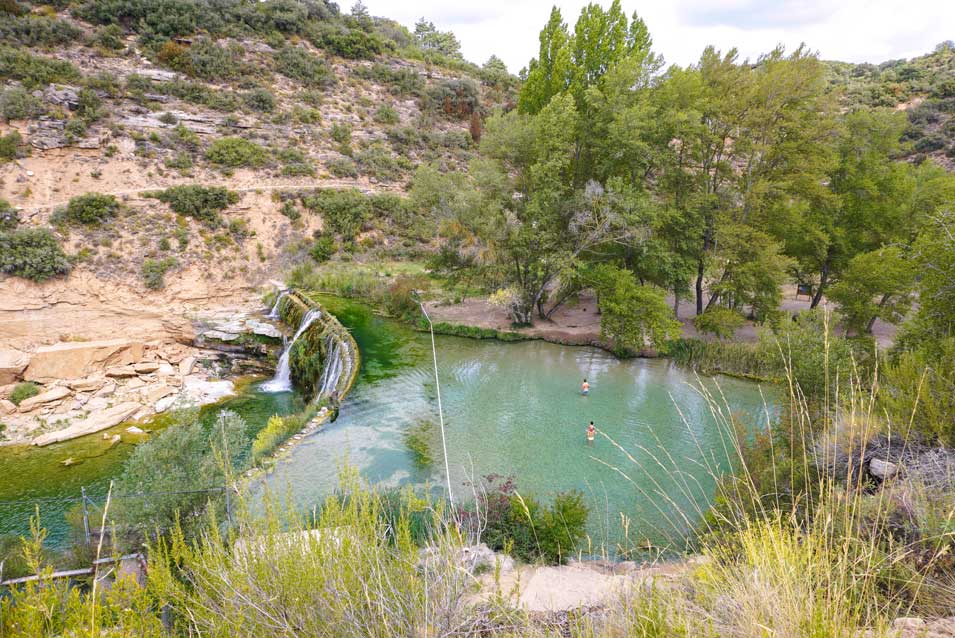 To reach the area with poplars, you have to cross the river on foot. The water will reach your waist. You will have to carry whatever you are carrying with you when you cross. 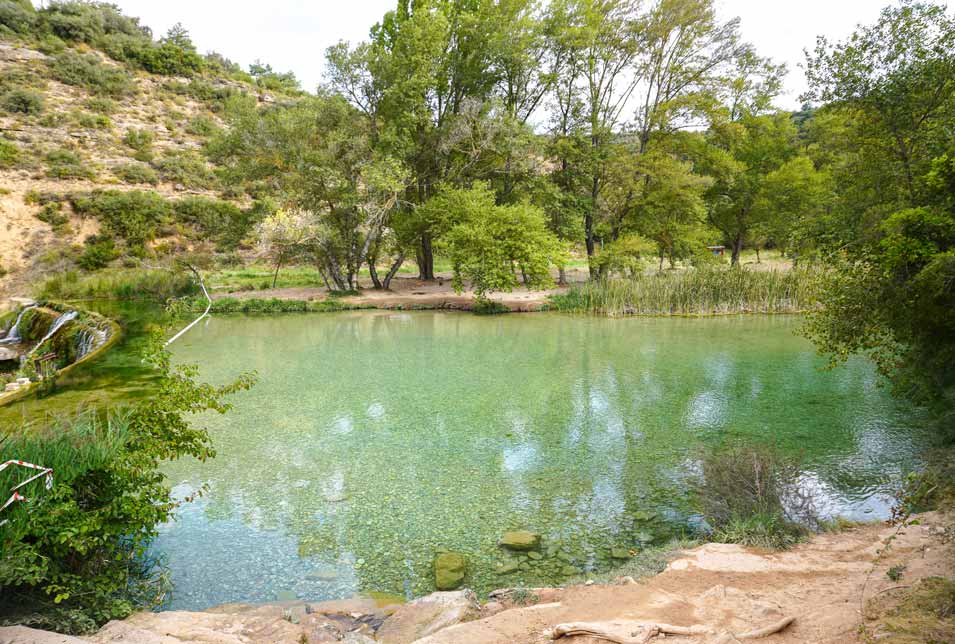 There is an entrance fee for the maintenance of the site and the workers. The price is €3 for those over 6 years old. Children under 6 don’t have to pay. 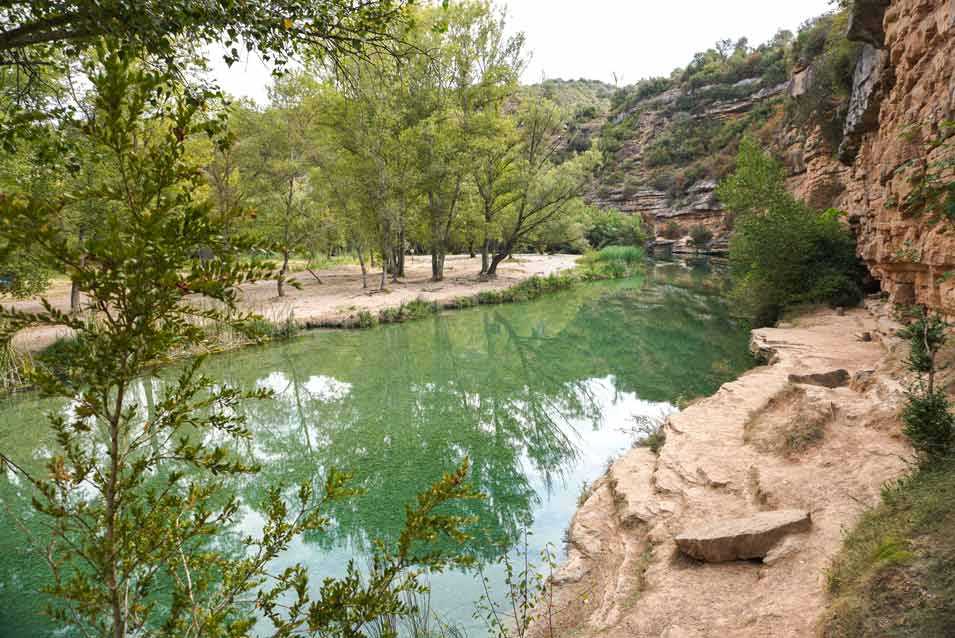 The price includes access to the bathing area and the toilets inside the fenced area. Tickets can be purchased at the entrance or online. 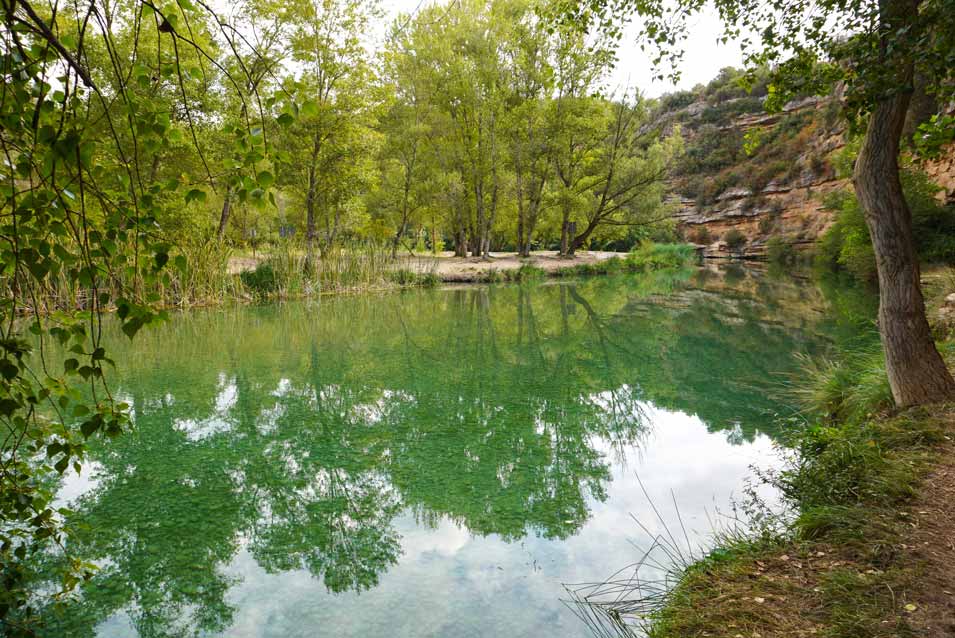 Salto de Bierge and its surroundings are considered to be one of the best places in Aragon for bathing in nature.

The crystal-clear natural pools that form before rushing over the weir attracts many bathers.

You can take your lunch and have a picnic in this wooded area next to the river beach, or eat in the restaurant.

Next to the car park is the hostel ‘Albergue El Salto’ with a bar, restaurant and magnificent views. 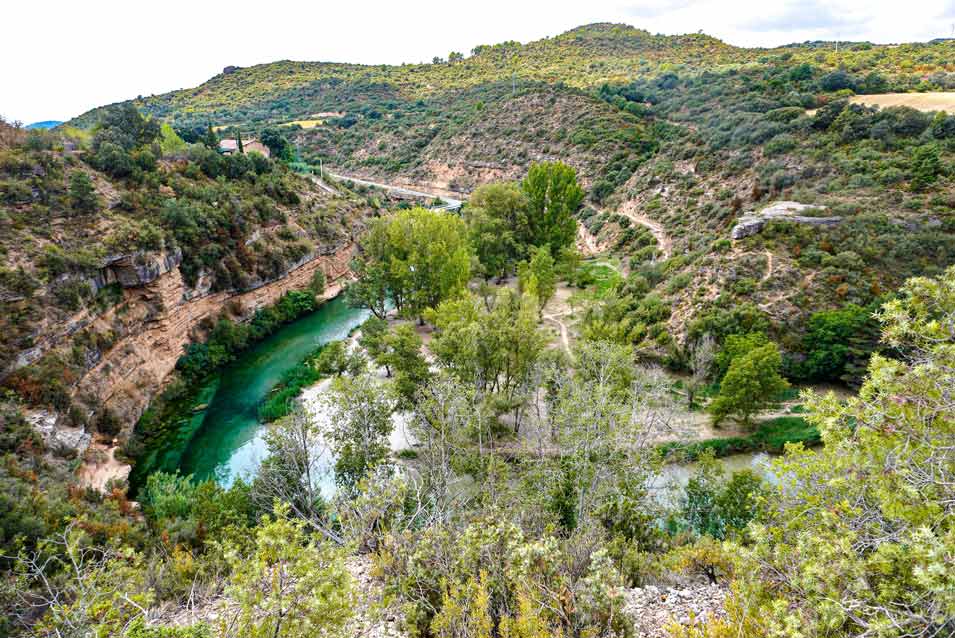 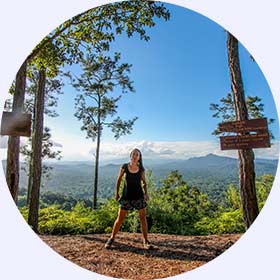 HOW TO GET TO - Salto de Bierge

The easiest way to get to Salto de Bierge is by car. There are public buses to Bierge, but you have to walk from there. It has become so popular that there are also organized tours that arrive by private buses.

How to get to Salto de Bierge

From Huesca, it is 41 km (1 h). You have to leave Paseo de Ramón y Cajal avenue to take the N-240 towards Barbastro. Then follow the Huesca-Lérida highway and take the detour onto the A-1229 that reaches Bierge. This village is part of the Cañones de Guara natural area.

From Bierge
Without entering the village, follow the A-1227 towards Aguas and Salto de Bierge. About 1.8 km from Bierge you will see a detour on your right, signposted ‘Parking and area of Hostel and Restaurant’. Take this detour and in 150 m you will be in the car park of Salto de Bierge.

From the car park, you must walk 100 m to the dam, descending a staircase. To get to the beach and shaded area (on the right bank of the river) you have to cross the river on foot. The water will come up to your waist.

It's easy to get there as it's very well signposted.

It is a 1-minute walk from the car park.

It can be visited all year round. In summer and late spring, it is ideal for swimming. Autumn is characterised by beautiful ochre colours.
The opening hours are from 9 am to 8 pm every day of the week. The 2021 season started on 15 June and ended on 12 September.

Since 2017, a symbolic entrance fee has been set for the maintenance of the site and the workers. Capacity is limited to 250 people per day.

Over 6 years old: €3 per person.
Children (up to 6 years old): free
From 7 pm onwards, they sometimes let you in for free.

The price includes access to the bathing area and the toilets inside the fenced area.

You pay at the entrance booth. Tickets can also be bought in advance at https://saltodebierge.info/.

There are three toilets for men, women and people with reduced mobility.

Salto de Bierge also has a restaurant and a hostel up the stairs.

There is capacity control, a fence that surrounds and protects the site and rubbish collection.

A pedestrian bridge over the river Alcanadre is being considered, to cross to the beach area without having to walk across the riverbed.

It is a perfect place to visit with children. The area is flat and there are toilets. However, crossing the river with small children to go to the poplar area may be a bit difficult. People usually carry them on their shoulders.

Pets are allowed but should always be on a leash.

It is forbidden to jump from the waterfall and access the lower pool.

It is also forbidden to camp, litter, make fires, cook and use air mats or boats.

Dogs must be kept on a leash.

Check the depth before jumping into the water or diving headfirst.

Remember that soap and detergents should not be used in rivers and pools. Also, most sun creams contaminate the water, try to apply them well before taking a dip.

Things to Do – Salto de Bierge

Things to do near Salto de Bierge

The surroundings of Salto de Bierge are ideal for nature lovers. There are hiking, mountain biking, equestrian and ornithological routes. This is the end of the Somontano Nature Trail and the start of the Hoya de Huesca Nature Trail.

In the village of Bierge you can see the 16th-century parish church.

Fuente de Tamara is a beautiful wild bathing area amidst nature. It is a spring in the river in an area with a steep stone canyon, which also has a small river beach. The car park is the starting point of the route, which follows the river Alcanadre. It takes about 1 hour to get there.

Rodellar is a world reference for climbing. It attracts people from all over the world because of its complicated walls. Leaving Rodellar is an impressive water route through the Fornazos and Puntillo Straits. It can be done in 4 hours. It descends between stone walls, jumps to spectacular pools and many ‘slides’, and ends at Salto de Bierge.

You can bring your food and have a picnic by the river or eat in the Salto de Bierge restaurant (up the stairs). It has a balcony with spectacular views, good food and value for money (€15 menu).

The restaurant and hostel el Salto have their parking for 30 vehicles.

The Salto de Bierge restaurant is 35 m away from the natural pool. It has rooms available and the hostel next to it too.

There are also many rural houses and hotels in this part of the Sierra de Guara mountains. For example in Bierge, Abiego, Adahuesca, Radiquero and above all in the amazing medieval village of Alquézar. In Rodellar and Las Almunias, right in the heart of the local climbing area, there are also several sites.

The natural pool at the top of the waterfall is large, reaching almost 200 m in length and between 10 – 30 m in width.

Soil and gravel (not slippery).

It is not deep (about 70 cm deep). You can stand in most of the natural pool at the top of the waterfall.

Adults do not need to be able to swim. Be careful with children who will not be able to stand in the water in some places.

Across the river, there is a huge area full of poplar trees, under which you can shelter from the sun all day long.

Very clean thanks to the town hall cleaning service. Unfortunately, every time people leave rubbish which then has to be picked up.

Visibility is very good (10 m). There are small fish.